THE Mourne Motorcycle Club is gearing up to hold its twelfth annual charitable motorcycle racing event on Wednesday, June 20.
The event will be held at Millbridge, Ballynahinch, with bikes on the track from 6pm, when there will be solo, quads and sidecars all taking part on the night.
Launching the event and addressing the members of the two charities Mourne club chairman, Billy McLarnin, said: “We try to choose local charities and causes that benefit everyone, or in some cases we choose individuals who are close to the club. “This has become a popular annual event and whatever money we get from the event, you get,” he said.
In the previous eleven years the Mourne club has presented £75,000 to 22 different charitable causes and this year we plan to raise money for the Motor Neurone Disease Association of Northern Ireland and the Perinatal Trust Fund (NI). Speaking at the launch Marie Holmes, Northern Ireland Secretary of the Motor Neurone Disease Association of Northern Ireland was first to address the Mourne Club members. Marie Holmes started by thanking the Mourne club and said that there are people living in and around Ballynahinch that they are trying to help: “We do our best to spend our money in Northern Ireland each year. “There are only between 110 and 120 people with Motor Neurone Disease in Northern Ireland and it can be quite isolating. We have volunteer visitors, who visit people in their homes and contact people by email. “We provide grants for people living with Motor Neurone Disease, along with grants for carers and for children. “We hold afternoon tea support services throughout Northern Ireland, where people can come to enjoy a cup of tea and company. “We also help with research as well. Our aim is a world free from Motor Neurone Disease,” she said.
Then Dr Richard Tubman, from the Perinatal Trust Fund, said: “The Perinatal Trust Fund is a small local charity that has been in existence for about 30 to 40 years. “We support the Regional Neonatal Unit in the Royal Maternity Hospital and we do a variety of things for this. “Mostly we help by buying equipment, but we also support the education of staff in the unit, which has a knock-on effect by helping the babies and their families. “We also help to support research into problems of newborn babies. I can’t thank you enough for choosing our charity, so thank you,” he said.
Once again, the Mourne club will be helped by The Ballynahinch Lions, Cafe Rossi and Keith Cullen from Herrons Country Fried Chicken on the night. The Mourne club is always grateful for the help they receive from Café Rossi and Ballynahinch Lions, but would also like to thank Keith Cullen, who is never seen with the club. Since the Mourne club’s first charity event in 2007 Keith has gladly supplied the trophies every year, but still doesn’t attend the event launch. This year the Mourne club is also receiving assistance from Watsons Flowers, Ballynahinch, who have already started the collection with a £150 donation, coupled with £150 donated at the Mourne club’s latest race day at Seaforde Moto Parc.
Admission to the event will cost £4 for adults, while children go free and car parking is also free. 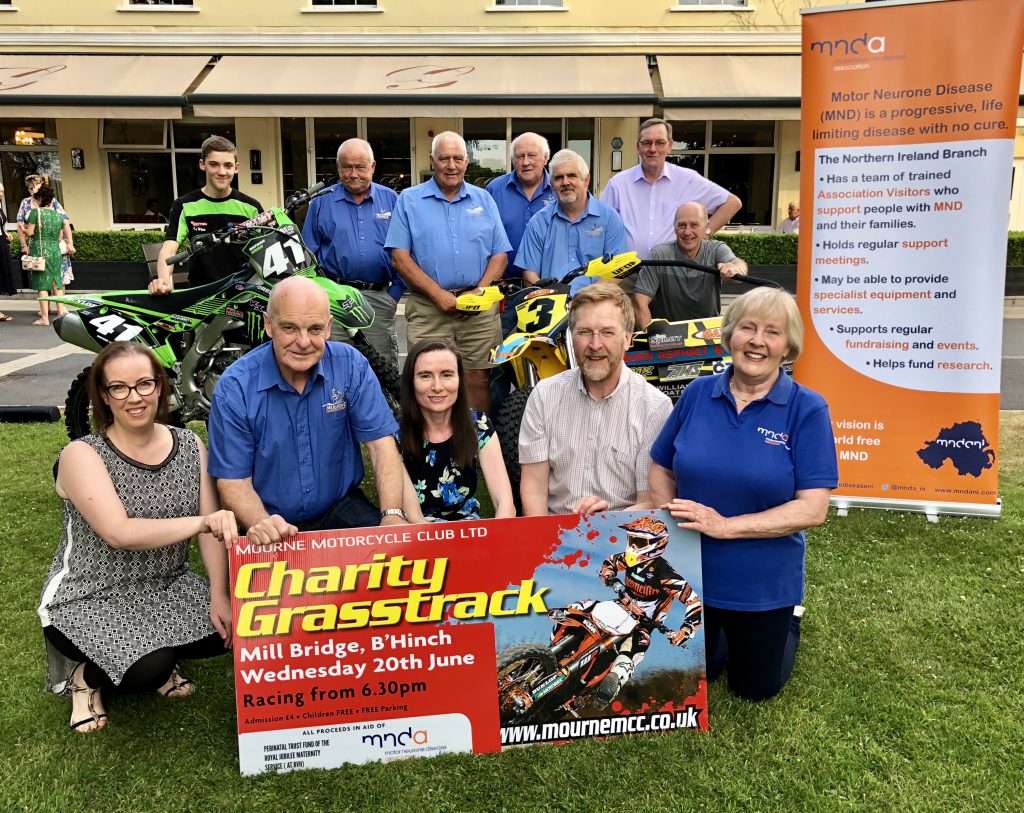