The members of the Mourne Motorcycle Club continued their charitable endeavours in 2017, running their eleventh annual charitable motocross event.
The event was held on June 21 at Millbridge, outside Ballynahinch, with all proceeds raised being shared between the Air Ambulance Northern Ireland Service and injured motocross rider Wayne Garrett.
This year the Mourne club is delighted to announce that with £8,000 raised through the event, Wayne and the Air Ambulance Northern Ireland Service will each receive £4,000.
The members of the Mourne club, along with everyone supporting our events, should be proud to know that the eleven charity events held between 2007 and 2017 have led to the Mourne club presenting almost £80,000 to 22 different charitable causes.
With so many worthwhile charitable causes, the members of the Mourne Motorcycle Club have always tried to support causes close to home.
Speaking about the charity choices Mourne Motorcycle Club Chairman, Billy McLarnin, said: “Every year we always arrive at the right charitable causes to benefit from the event.
“We don’t want the money that we raise to go into a big pot, but to be used locally.
“The Air Ambulance is for everyone and while we hope that we don’t need it, we know that it will be there. I have known Wayne since he was a boy and he started racing and we are happy to do anything that we can to help him,” he said.
At the cheque presentation Breige Mulholland, Air Ambulance Northern Ireland Office Manager, and Mike Patton, paramedic, spoke about the Air Ambulance and that the high-end work is that they are now saving lives. Now patients who have suffered major traumas and head injuries can go straight to the Royal Victoria Hospital.
On the day of the event the Mourne club was helped by The Ballynahinch Lions, Herrons Country Fried Chicken and Cafe Rossi, along with Uncle Hugo who brought his road show to Ballynahinch to drum up support for the event. The event involved racing from motorbikes, classic bikes, quads and sidecars.
Once again a HUGE thank you to everyone who supported this years event to allow us to hand over the amounts we did! 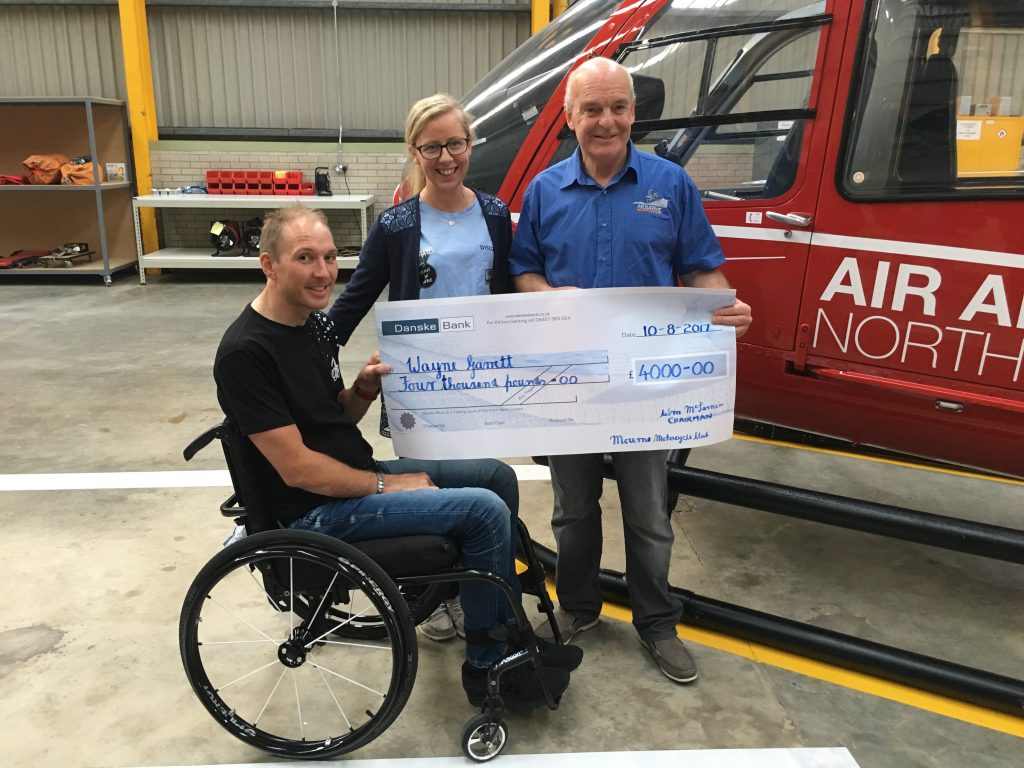 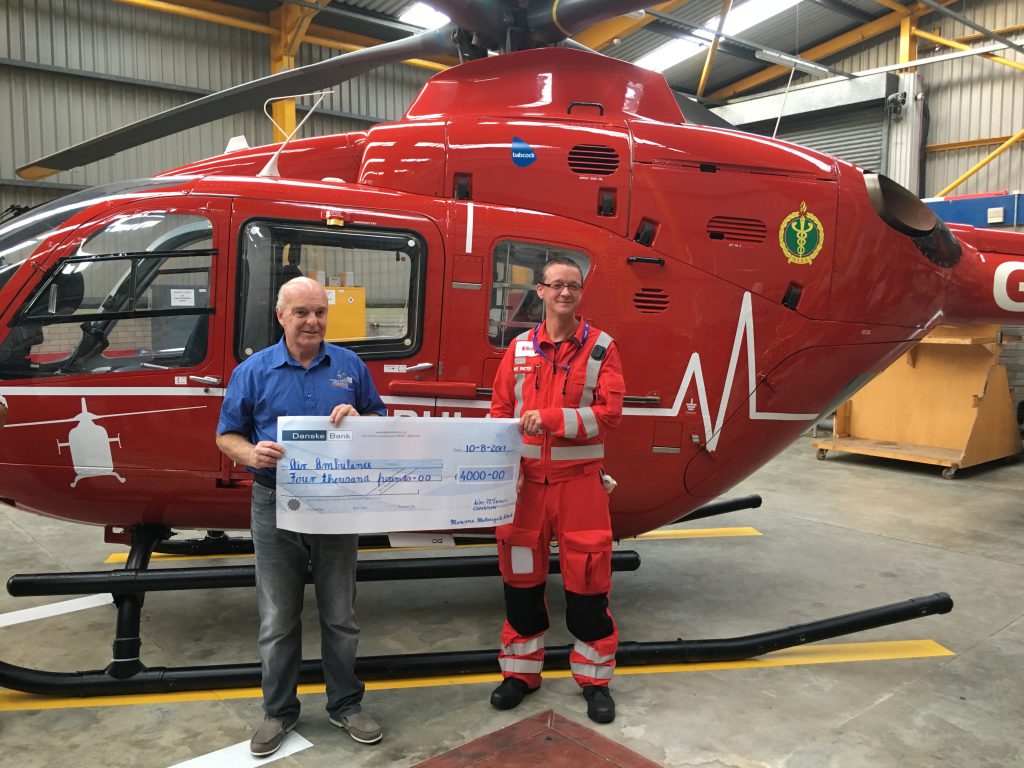 Billy McLarnin & Mike Patton, who is a paramedic with the Air Ambulance Northern Ireland Service. 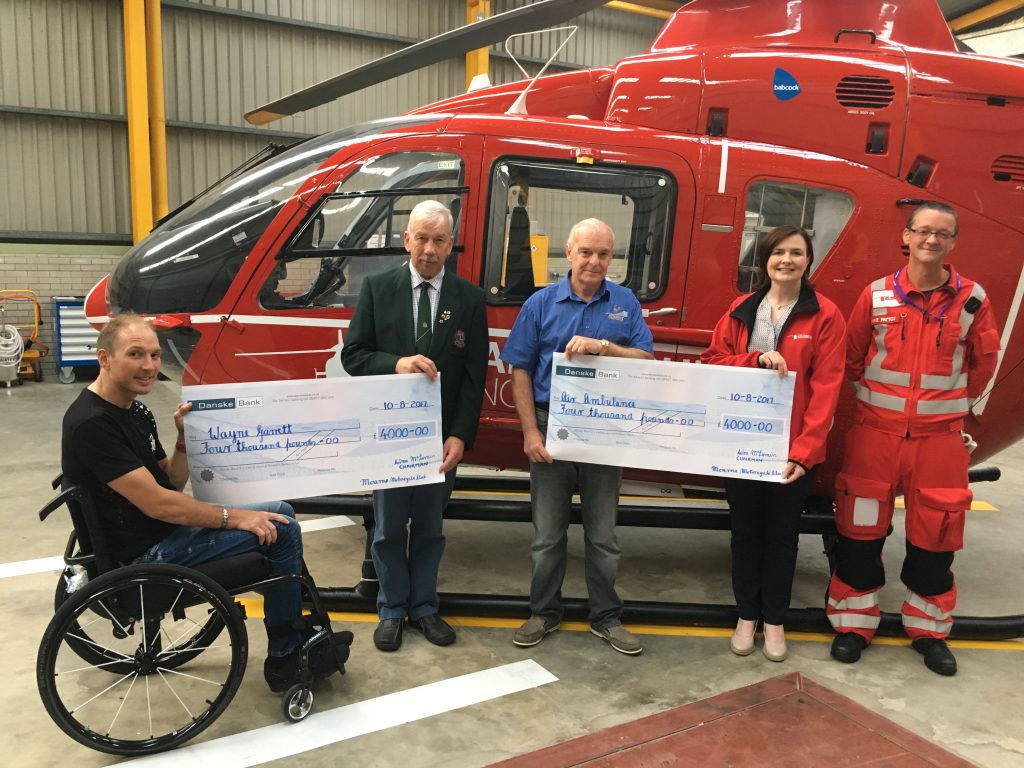 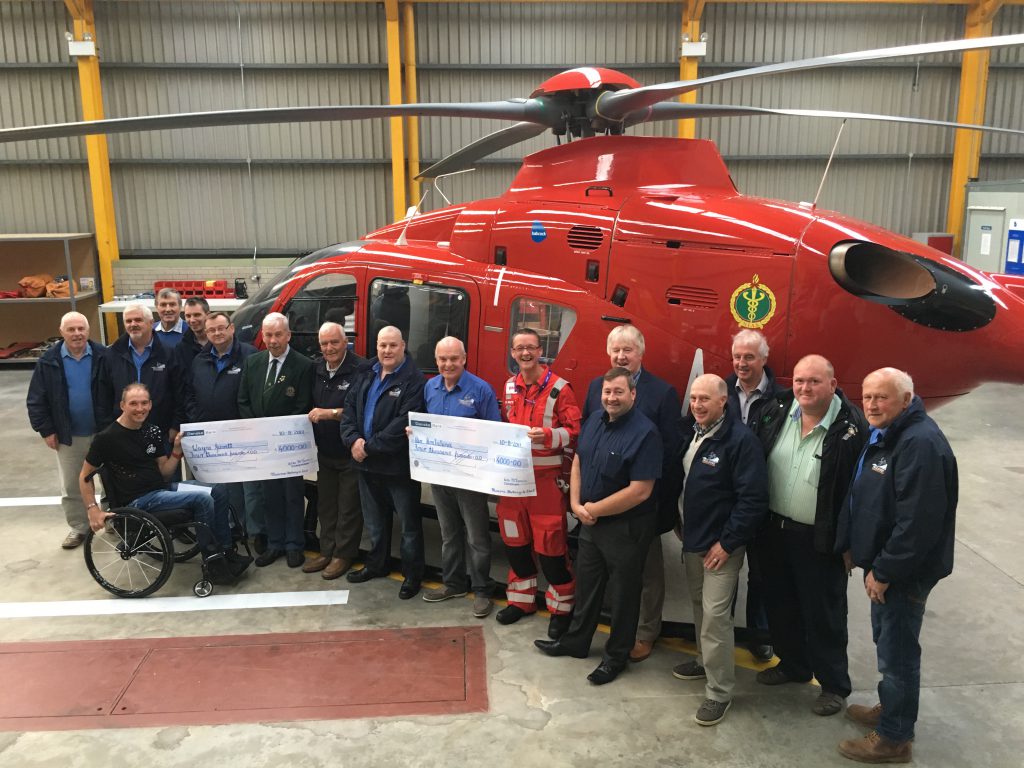